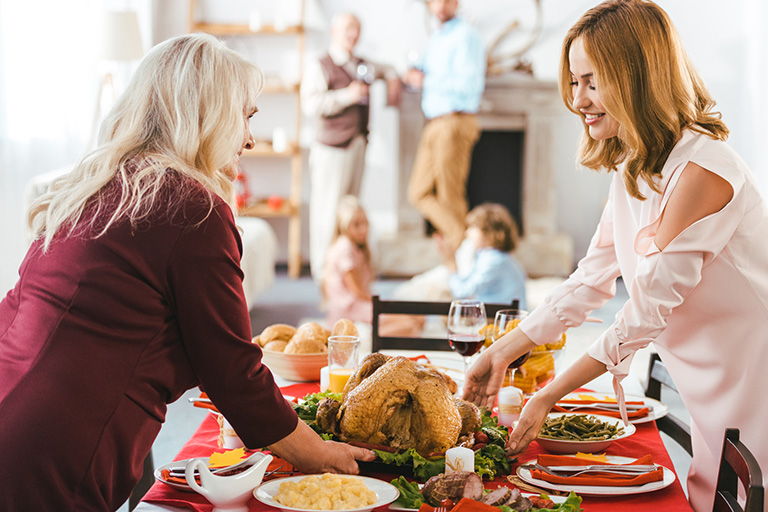 In 1789, President George Washington declared November 26 to be officially recognized “as a day of public thanksgiving and prayer to be observed by acknowledging with grateful hearts the many and signal favors of Almighty God.” Since then, Americans have celebrated Thanksgiving Day on each fourth Thursday in November, with gatherings of family and friends for a turkey-centered feast.

In school, children learn about the Pilgrims, who sailed from England in September of 1620 aboard a small ship called the Mayflower. The Mayflower carried 102 passengers, some who were religious separatists seeking a new home where they could freely practice their faith, and others were lured by the promise of a new beginning and land ownership in the New World. After 66 days at sea, the Pilgrims landed in the New World and began the work of establishing a village which became known as Plymouth, Massachusetts.

The history of the first Thanksgiving also has another, more violent version. This alternate version highlights the crimes of the Pilgrims with accounts of mass genocides of the Native Americans as well as murder, rape, kidnapping, arson, and slavery. Many historians believe that the Wampanoag tribe was not invited to this harvest celebration at all. They believe that members of the Wampanoag tribe heard the firing of guns and cannons as the pilgrims were celebrating and simply went to investigate and perhaps prepare to defend themselves.

There are several accounts of pilgrims kidnapping and murdering tribal members both before and after this “first Thanksgiving” celebration. These accounts depict the pilgrims celebrating their crimes as the tribes were slowly wiped out by the intentional spreading of the small box disease through blankets given to the tribes and the burning of their villages.

This view is a stark contrast to the traditional narrative of the Pilgrims and Native Americans sitting down hand and hand, masking the long and bloody history of conflict between the Native Americans and European settlers that resulted in the deaths of tens of thousands. Since 1970, protesters have gathered on Thanksgiving Day at the top of Cole’s Hill, which overlooks Plymouth Rock, to commemorate a “National Day of Mourning.” Similar events are held in other parts of the country.

Thanksgiving Crimes of the Past and Present

In recent years, law enforcement has seen a rise in DUI and Retail Theft charges over the Thanksgiving holiday weekend. With friends and family in town for the holiday celebrations, many find themselves overindulging in alcohol and making the poor decision to drive home. Driving under the influence not only puts you in danger of criminal charges, but you are also at risk of being involved in an accident and injuring yourself or others. It is always smart to have a designated driver or call for a ride to get you safely home.

Black Friday brings plenty of amazing sales and deals. Some people see the craziness of these Black Friday shoppers as an opportunity to steal items while the stores are packed with customers. Loss prevention officers in these retail stores are prepared for this and with the increased use of technology, almost all of these crimes are caught on video. Retail theft crimes can result in felony convictions if you have prior retail theft convictions no matter how little the value of the item taken. These crimes are not worth the possible jail time and court costs and fees you will be assessed.

Our attorneys and staff at Tibbott and Richardson wish you and your family a safe and happy Thanksgiving holiday. We are thankful for the opportunity to assist you in your legal matters.